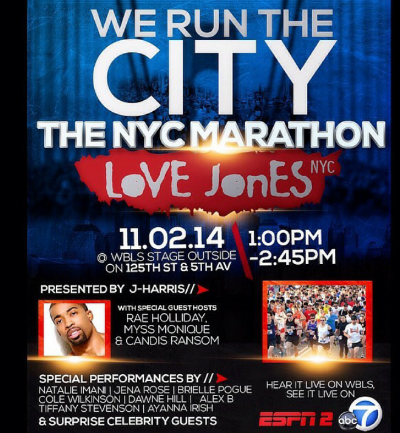 NYC marathon runners from all over the world had some entertainment from 107.5 WBLS stage as they passed on 125th st and 5th ave. Radio personality of WBLS, Deja Vu hit the stage encouraging runners to keep pushing  with 22 miles to go and shouting out their badges which read their name, country, or community group.

It was showtime for J. Harris’ seven aspiring, gifted artists to take over the WBLS stage live on ABC 7 and ESPN 2.   Alex B performed “Best Time of My Life” by American Authors and one original song. Cole Wilkinson played his guitar singing two original songs, then had Jena Rose on the keyboard joining him on “Waiting on the World to Change” by John Mayor.   Jena Rose did her solo performance of “Bennie and the Jets” by Elton John and one original song. Brielle Pogue danced with her two male backup dancers as she sung “Shake It Off” by Taylor Swift and two original song. Dawn Hill gracefully sang one original song.  Ayanna Irish  and her  backup singers performed “I Want You Back” by The Jackson 5, one original song and “The Greatest” by R. Kelly. Lastly, Tiffany Stevenson sung one  original song. These powerful singers has a bright future in the music industry. Good Luck to them! To close out the Love Jones segment, all hosts and artists came together and sang their version of the Love Jones theme song.

Thanks to Chamber of Commerce and WBLS for Love Jones to partake in the entertainment for the NYC Marathon runners and those who were watching and listening where ever they were! Also, thanks to J. Harris exposing fresh talent to the masses.