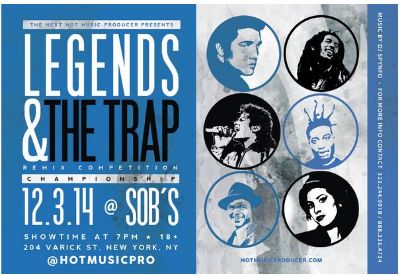 Hosts Chazeen and Comedian Marcus Banks  introduced the  opening acts – steppers from  Players Club Entertainment located in the Bronx, and Reggae artist Reddaz.  Steppers had the crowd in awe as they did tricky beats with their hands and feet. And you just couldn’t help yourself dancing to Reddaz’s songs!

Round 1 of the competition, producers had to run 90 secs of their tracks.

First up, Elevator Muzik sampled Whitney Houston “Dance with Somebody”, DJ Tip sampled  Kirk Franklin and Janet Jackson. It got very confusing to judge with Elevator Muzik because he didn’t know the rules of the championship. Based on the overall delivery of the two producers, the judges voted DJ Tip  to the next round.

Remmy Redd also did Aaliyah “Rock the Boat” while Hitmaker Chinx did a song from Emineum. Amadeus and the rest of the judges felt Remmy Redd beat, which made him enter into Round 2.

Steve Almighty did Beatles’ “Eleanor Rigby” and McCro Music did a song from Tupac. At first, Steve did not want to reveal his sample. That didn’t go so well with Ted Smooth. What he said was food for thought to producers: “You think people will be into the sample, they’re really not. I’m all for being confident on stage. Always let the people know what you’re sampling. If five people don’t get it because of that, that’s a “L” for you…The next time you’re in these competitions, pick a very familiar sample. Why? That don’t mean you’re corny…because the people know the original and they see how you flipped it. I never heard that sample in my life so I don’t know what the hell you did.” Feeling embarrassed, Steve reveal the sample title. Overall, Ted believed it was a great beat. For McCro Music, Ted felt it was a reproduced Tupac record. “We was waiting for the beat to come by itself, but it never got there”.  Based on Steve doing something different, he went through to the next round. Talk about luck!

Phinestro sampled Tupac and Hot City sampled Micheal Jackson’s “Beat It”. Phinestro twisted sequential of his chosen sampled was perfectly put together. Mic Barber says “You came in too hot! You did it perfect!” Hot City’s beat was repetitive, but also awesome.  Mic called it a tie and asked for them to play another track. The tie was broken by Phinestro winning the first round.

Three time winner. Point 1 sampled Enrique Iglesias explicit version “Tonight” and Beat Knocka sampled Tupac. Judges called it a tie by wanting them to play something else, but DJ Spynfo said they have to make a decision. Amadeus made clear “the drops, transitions” were amazing. With these two producers, the beats were so awesome, Amadeus  threw a handful of cheese flavor tortillas to the stage! Audience shouted Phinestro and they had no choice but to choose Phinestro, which brought Round 1 to an end.

In Round 2, the six producers had 1 min to present.  Phinestro sampled Tupac and DJ Tip sampled Prince “Diamond and Pearls”. Amadeus  loved both tracks, he wanted to hear more. Marcus Banks granted 30 seconds. Ted Smooth explained  Phinestro did a trap beat while DJ Tip did a remix, which was hard to choose. After the producers played their second sample, DJ Tip moved on to Round 3. Steve Almighty sampled one of Ozzy Auburn’s songs and ProducHer did a Tupac song. Steve moved on. The two top producers Remmy Redd and Point 1 were amazing with their beats, the judges brought both to the 3rd round!

Round 3 had four producers instead of three, who had 45 secs to show off their best samples. This would determine the champion of the night! Judges were responsible for choosing the two producers to compete for the championship.  DJ Tip won over Steve and Remmy Redd won over Point 1. The audience had to make noises for the one they wanted to win $1,000 and Guitar Center prizes – Remmy Redd or DJ Tip. Congratulations Remmy Redd !!!